This may be one of the greatest things ever. A four race series that races at night! As if cross wasn’t hard enough these guys had to go and make it harder to see and even colder! YES!

Apparently the idea started 9 years ago at Starcrossed 2002 by promoter Terry Buchanan as a sketchy idea of his, that had to have been conceived after a beer hand up or five. Well 9 years later Brook Watts(Cross Vegas), Dorothy Wong(Spooky Cross), and Mike Weiss(Gateway Cross Cup) have all drank Buchanan’s kool-aid and jumped onboard! 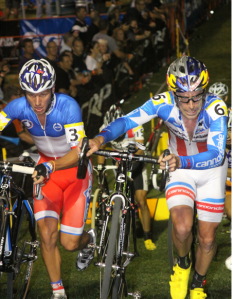 Oh ya and did I mention these races are all UCI? And will have riders like Bart Wellens, Rob Peeters, J-POW, Tim Johnson, Trebon, Katarina Nash, Amy Dombroski, Chloe Forsman and on and on?!?! I will definitely be making my way out to at least a couple of these races and think you should too.

2011 Cross After Dark series races are:

4 Responses to CXAD = CX After Dark